Do not be put off by the ultimate reign of Tony Montana, with this video slot, the good man may end you up with an even better sum. The great feature film Scarface is one of the most popular movies ever made, hence the idea of making a video slot about it. 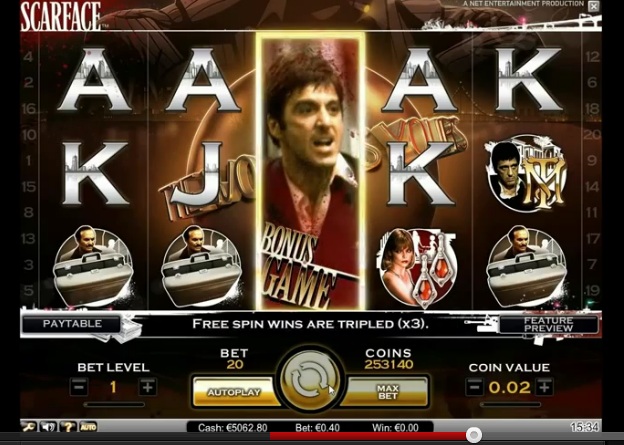 This theme slot is made by none other than NetEntertainment, a big name in the world of video slots. This video slot has twenty lines on which winning combinations can appear. On five of the reels and three rows, images will appear, of course all ‘Scarface’ themed.

Characters from the move

The familiar faces from ‘Scarface’ appear on the reels on a regular basis, think about ‘Manny’, for example. And plenty of other characters will appear.

The nice thing about this video slot is, apart from the mafia theme, the exciting extras. For example a unique, extremely exhilarating bonus game. The free rounds come by regularly, making winning even easier. For the other extras, you will just have to give the game a try, which is possible in most online casinos.

Winning is not hard, but how much, that is the question. Of course this is under your control, seeing as you can determine the coin value to play with. You can already start playing with just one euro cent, with a maximum of fifty euro cents. The level can also be important, so choose it wisely. The levels are from one to ten! There are a maximum of twenty lines to recognize winning combinations.. Have fun on the ‘Scarface’ fruit machine.