When playing online poker, the betting part is perhaps the most important part of the game. It requires good focus and careful consideration. That’s because the betting part is where the strategy comes in. Your bet can make competitors doubt, put them on the wrong track and last but not least: a good strategic bet can make you win the game. Based on the bet you make, your competitor will try to figure out whether you have a bad or good hand. You might be bluffing? In most cases, the competitor will respond in either of the following two ways: that’s by following your bet (and having a good hand, apparently) or he will fold, meaning he has a bad hand.

The way the game works is that people who have equal good hands will be competing against one another. On the other hand, smart players will be able to put their competitors on the wrong track by bluffing and winning the game with a relatively bad hand. Listed below are 5 different ways, or so called ‘betting strategies’ which can help you win a game of poker.

It’s not very kind, but it is very smart: ‘steal from the blind’. When the players receive their cards, they can place their bet. On that very moment, the dealer hasn’t yet placed cards on the table. You can then place a bet, one which is higher than required. Most players in this case will fold, meaning that you win the game.

Ofcourse at the start of the game, the pot isn’t very high yet and you won’t win a lot. It’s an advantage though that one game is followed up quickly by another. The risk when you attempt to ‘steal the blinds’? If as competitor doesn’t fold, you can find yourself in deep trouble!

Want to play with a big pot, the kind that will make you chip leader at an instant? Then the Check-Raise is a smart way of playing the game. This is not a method to bluff other players or win the pot at a high pace. No, this strategy works quite different. You only check with a strong hand, so other players on the table have to raise and increase the bet. 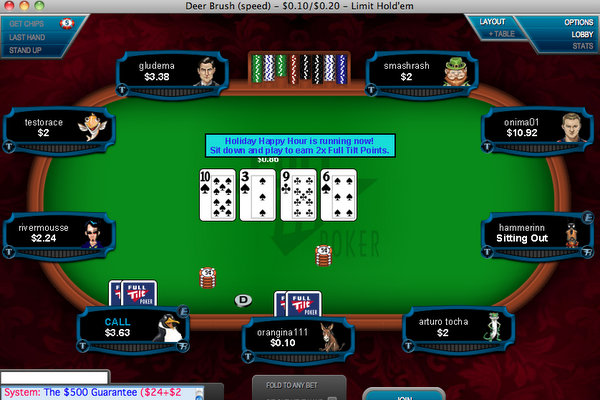 By playing this way, your competitors think they have the stronger hand and are likely to win. Then next, you don’t fold, you don’t check, but instead raise the bet. This makes a high pot and creates a lot of confusion with your competitors. But be cautious: be sure of your hand and don’t get beaten!

This strategy is similar to the previous one. Once the dealer has placed the first 3 cards on the table, the players can make up their minds and decide what to do next. Raise the bet or check? Let’s say that your competitors all have a bad hand and one after the other checks. Then what you can do is place a big bet and raise the bet. It’s then very likely that all your competitors will fold, leaving you with the entire pot!

You can use this strategy when you’re at a so called ‘draw’. This means that you’re close to having a Flush or Street and your chances on winning are looking pretty good.

This strategy can easily be considered as bluffing and therefore it’s not without risk. It could easily be the case that before the flop, before the dealer places the first 3 cards on the table, a bet will already be placed. A natural counter response from players is that they will fold. Players with a strong hand will be instead continue playing and raise the bet.

The purpose of The Opener is that players with an average hand won’t continue playing and will fold. But these players can still cause a threat when the fourth or fifth card is brought to the table. You never know if they might be lucky at last and get the right card…

Improve your poker strategy in 7 steps

Even though poker is officially a game of chance, as a player you can definitely have your fair share of influence and strategy on the game. There are a lot of creative ways to make the game turn out in your favour. Playing according to a strong strategy is therefore an absolute must. To establish a proper strategy takes a lot of time and effort, on top of that it’s a process that requires constant revisions. Finding that perfect balance between securing yourself and winning is a challenge for sure. Do you feel like your poker strategy can use some new insights and skill? Then use the following 7 steps to achieve that.

Many poker players feel the urge to play with as many hands as possible. However, experience shows that most winning players realize that at some times, you’re really better off to fold with more hands than actually playing them. Playing aggressively is sometimes rewarding, but can equally increase the risk of losing lots. In MTT’s, a successful player is often being described as playing “tight-aggressive”. That means that the player only plays about 15% of its hands. This might be a shocking statistic for the beginning players amongst us, but nevertheless do keep it in mind!

If the player is driven, they’ll often continue for a long time playing game after game. Poker is an intensive game that requires a strong sense of attention and mental awareness. That means that after some time, you’ll get tired. There are different reasons to play for a long time. For example if a player has just lost 100 euros, he can feel an intense drive to keep playing. Only in that way it’s possible to potentially win back the losses. But of course do keep in mind, you’re not actually on a “losing streak”. If that is the case, than the possibility exists that you’ll be finishing the night with a financial hangover.

New poker players are usually aware of the fact that they’re competing with better and more experienced players. But nevertheless, as soon as they master the tricks of the game, it can be easy to overestimate yourself especially if you’ve won a few times. The consequence of that can be that you’ll be outplayed. But don’t see this as a failure; instead consider it an opportunity to improve your game. Losing from better players is never failure, as long as you keep drawing the right lessons from it and keep on improving. 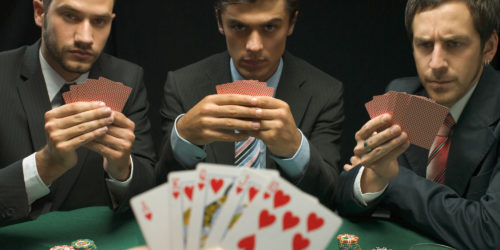 Step 4: Keep your emotions in check

One of the most crucial aspects in the poker game is in the emotions of the players. While we don’t say that you should be playing with no emotion at all, but you do have to be capable to keep them under control at all times. Only by doing this you can exercise proper influence on the game. Letting your emotions take the best of you often means that you make mistakes easily and sometimes those consequences can be disastrous. There is a reason the word ‘poker face’ has become so full of meaning!

As much as the game process of poker is important, so is the bankroll management of the player. Experienced players therefore always emphasize on the fact that you should always carefully pick your games and limits. Only by approaching it this way you’ll minimize the chance that you lose all your money in one tournament or game. Carefully considering your bankroll is crucial in order to update your poker strategy. 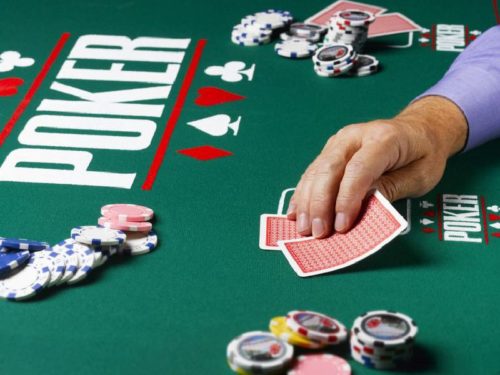 Every player will once find themselves in the situation where they’ll be in a poker tournament with only 12 times the big blind. This might be one of the most nerve wrecking situations ever for the beginning poker player. The impulse to go all in at an early point might be too tempting. It’s often in these situations that the great poker player differentiates themselves from the average one. Keep your head cool and wait until you find yourself in a better position. Avoid impulsive actions and don’t lose it. Only when doing this you can find your way back into the game.

Step 7: Force yourself to improve your poker game

You can be a good poker player, but you can always do better. Just like with every other thing in life, the case with poker also is that you get better the more your practice. So therefore give yourself the time to improve and practice your poker strategy. Rome wasn’t built in one day, so don’t expect yourself to win big at the very start. Carefully craft your skills and improve as you go. Then finally you should be able to own the game and measure up to the big, experienced, winning players.